The McAulay-Hope Prize for Original Biophysics

Biophysicists are by nature innovative. Crossing the boundaries of many scientific fields, biophysics inherently calls for the development of new techniques, equipment and models. The McAulay-Hope Prize for Original Biophysics is designed to recognise true originality and innovation in the field of biophysics, rather than the use of existing techniques or applications. 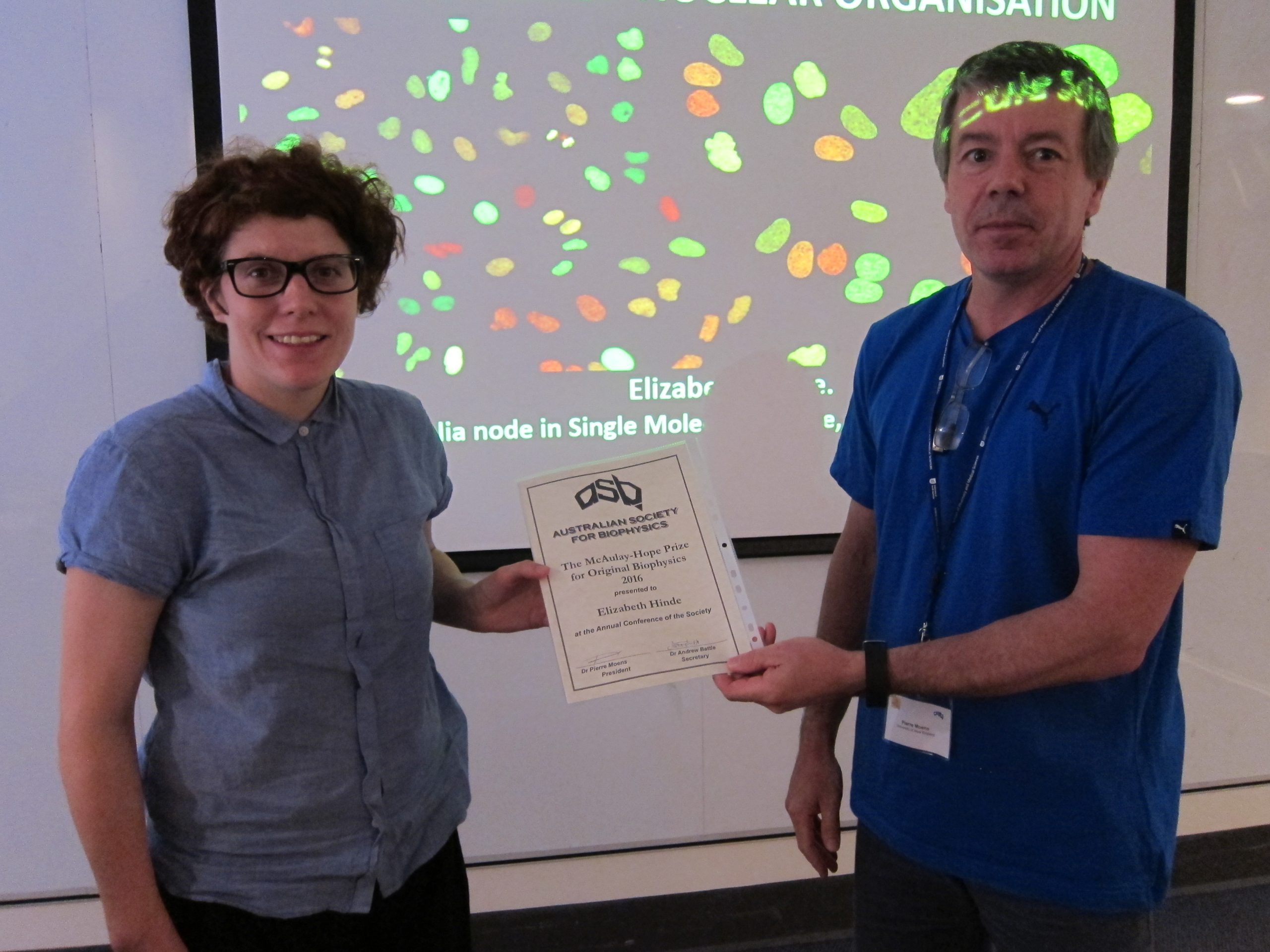 The award, comprising of comprises a medal and $1000 to be used to promulgate and further develop the recipient’s work and ideas was set up by Prof. Hope and honours the contribution of Alexander Leicester McAulay, a Professor of Physics at the University of Tasmania and (almost certainly) Australia’s first Biophysicist.

This Prize is not given each year but rather will only be awarded when a truly original biophysicist is nominated (and seconded) by members of the society (without self-nomination). The Original Biophysicist was initiated by a donation from one of the founders of the Australian Society for Biophysics, Professor Alex Hope.

Alexander Leicester McAulay graduated from the University of Tasmania in 1916, joined the staff as a lecturer in 1922 and was Professor of Physics from 1926 to 1959. His father was a Professor of Mathematics and Physics before him!

McAulay was almost certainly Australia’s first Biophysicist. Here are a couple of impressions from Alex Hope’s autobiography “Driven by Electricity” (Book One: “Growing up in Tasmania, 1928-52”).

(On choosing an Honours programme in the Physics Department).

He did not See a Ray of Hope in Optical Physics, Cosmic Rays were less than Cosmic, Theoretical Physics was – well, too Theoretical for a practical chap, leaving Biophysics with Professor McAulay. This original man had pioneered in Australia the study of the mutations in yeast caused by Ultraviolet radiation. He now proposed a project to investigate the electric fields in and around plant roots and shoots, which he considered could be developmental forces in plant growth. Bioelectricity sounded fun to an electronics freak.

The Professor’s style of supervision could be described as unconscious pressure. He probably did not realise the devastating effect of comments such as “Well, Hope, I’ll come back when you have got it working” and his prompt striding away. He had visited the experimental setup just as problems were encountered, so we could not show progress. In his appearance, Prof McAulay was slightly eccentric; while others wore suits and ties (around the neck), he could be seen with a tie as a trouser belt, and a magnifying lens dangling on a string. A somewhat plummy English accent added to the total effect.

The conditions of this annual award are as follows:

The McAulay-Hope Prize for Original Biophysics is open to all financial members of the Society meeting the eligibility criteria and is designed to recognise outstanding original biophysics. The biophysics should have been undertaken principally in Australia or New Zealand. There is no age limit on applicants for this Prize.

Prizes will be decided upon by a Prize Committee consisting of four Society Council members, ex-council members or former awardees, together with the Society Secretary, who should normally not be a voting member.

No person shall serve on the Award Committee for more than two consecutive terms.

The composition of the Award Committee will be decided either by the ASB Council or by an election at the AGM of the Society held during the annual conference.

Where a clear decision cannot be made by the Award Committee, the application may be sent to a third referee, usually an eminent international scientist not connected with any applicant.

If the Award Committee judges that none of the nominations merits an award in a given category, then no award will be made in that round.

Join The Australian Society for Biophysics

Join our community and get connected with other like-minded people with a passion for biophysics!